Despite the fact that Rival Casinos software is one of the newer kids on the block, it has left a lasting impression on the online casino world. Below we will be looking at what makes this software company so great.

Born in 2006, a lot of work has gone into creating Rival. Not only has Rival licensed its amazing games to more than 52 online casinos but what makes Rival extra special is the fact that its software can be used on various devices and platforms with ease. Something which all Rival Casinos have in common is how colorful and inviting they all are, however, in addition to this, the software itself is very easy to use with icons guiding players wherever they need to go. A feature which everyone seems to love is the fact that your current account balance is always displayed at the top of the page which means that you will easily be able to keep track of how much you are spending.

Things you should know about Rival Casinos

Something which the founders of Rival were clear on was the need to launch something completely new, innovative and different from what already existed. The company has built its foundations on delivering the best of the best which is why Rival Casinos Software is considered to be some of the best and most user-friendly software out there.

With more than 200 games and counting to choose from, it's little wonder that players keep coming back for more. That said, another aspect which keeps people coming is the chat function which has been added into many of the games which allows you to ask for help at any point of your gameplay.

Rival is the software of choice for so many Online Slots players because its slots games are so spectacular. Indeed, Rival's amazing range of interactive slots or i-slots is so technologically advanced that every single slots game is an experience. The software company has three different slots varieties: three reel slots, progressive jackpot slots and multi-video slots which means that whatever your slots needs are, they will be catered for. We at GamblingPlanet HQ are particularly fond of the 5-reel slot game Star Jewel and the progressive slot game Major Moolah.

From what you've read above, you might be led to believe that if you're not a slots aficionado, there will be nothing for you, right? Wrong. Rival has not only blown all its slots competitors out of the water, but it's developed an amazing range of table games which is guaranteed to keep you wanting more. Whether you want to play Online Blackjack, Online Roulette or even Craps and Baccarat, Rival has you more than covered. Rival are so concerned with giving players what they want that they've even gone the entire hog and introduced Video Poker which means that you can enjoy Jacks or Better, Joker Poker and more in the kind of style you could have never even dreamt of. 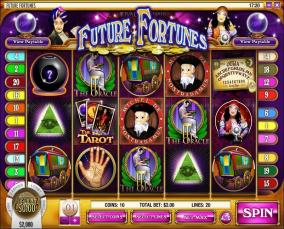 While in the past, there wasn't the necessary technology to have kickass sounds and graphics, those days are thankfully long over and Rival has taken full advantage of this. When it comes to the sounds and music in Rival Casinos games, players can not only look forward to realistic ambient sounds which would usually be heard in a brick and mortar casino, but all the music has been designed to complement the games (instead of irritating you). Rival Casinos graphics are top notch and in fact, iSlots games are so gorgeously vibrant that they are guaranteed to keep players completely engaged. What's more, players can look forward to fun animations at important points in the game which adds a little something extra. The Rival table games have also been given similar treatment with players commenting on how smooth and seamless gameplay is. In addition to this, while you are playing, pop-ups will appear every so often to offer you help on your Rival journey.

Cross-Compatibility of Games at Rival

Like they have done for their sounds and graphics, Rival Casinos have opted to use the newest form of technology out there when it comes to their game development. While in the past casino games were developed using Adobe Flash, Java Script and PhP, Rival pulled no punches with its choice and opted for HTML5. This move obviously made so much sense thanks to the boom in mobile traffic which has dominated the last few years. As we mentioned before, Rival casino games are available in both downloadable as well as non-downloadable form however in neither case is game quality compromised an iota. One of the first things you will be asked when playing at Rival Casinos is whether you want to download your game or play it in the browser and while you might think that downloading it will be a waste of time, the truth is you can get many hours of fun out of just going ahead and downloading. What's more, you don't have to worry about the quality of your game because once you download it, your game will update itself whenever software developers make any changes.

Rival understands the importance of security and fairness which is why they have done their utmost to give their players the best of the best. Not only are all Rival games powered by Random Number Generators but the casino software company has developed fraud prevention software which is able to detect and act on fraudulent behaviour immediately. Players and online casinos are protected from fraudulent behaviour through a fingerprinting system called Identiprint which monitors each connection along with a 128bit SSL technology which records and tracks each and every transaction.

Rival Casinos support a wide range of languages. In fact, you can find games available in no less than 11 languages. The best thing to do is always check beforehand whether or not your casino of choice offers your language.

Play at a Rival Casino today!

Despite the fact that Rival has been around a lot less than other software companies, it has managed to gain a well-respected reputation that few other software casinos can boast of. So pour yourself a glass of wine and prepare yourself for a feast of the senses with Rival Casinos.