As an immensely popular game throughout the years, Backgammon has recently become a popular online-gambling activity for many Internet gamers. The game itself combines both luck and skill with elegantly designed mechanics--the main reason, no doubt, is that it attracts so many different kinds of players. Below we go through everything you need to know about playing online Backgammon for real money at online casinos.

Our Reviews of Backgammon Casinos

While backgammon isn't readily available in most online casinos, its emergence on the scene certainly warrants giving it some treatment on our site. Above we’ve provided a list of ‘Best Backgammon Casinos’ to play at. Find out all you need to know about playing the game for real money, then head to a few online casino reviews to read about the internet casinos that we’ve selected and what they have going for them. After you’ve selected one to sign up at, go ahead and register your details. Then deposit some money and claim your online casino bonus by following the steps. And voila, you’re pretty much set to spend a good few hours to play the game of skill from the comfort of your own home.

Backgammon has traditionally been played as a two player game for thousands of years. During the game, a Backgammon board is used along with a pair of dice and 15 checkers for each player which serve as markers. The aim of the game is to move all your checkers along the board’s triangles to your home board and then bear them off. In a normal game of Backgammon, the first one to bear all of the checkers will win the game. Checkers can be removed only when all your checkers are on your home board.

How to Play Backgammon 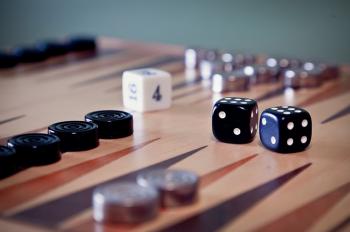 During a game of Backgammon, you and your opponent must sit across from each other. Once the Backgammon board has been set up with all its checkers, the game will commence when both you and your opponent take turns rolling a single die in order to determine who will go first. The person who has the higher score on the die will then start.

After it’s been fairly decided, the player will then roll two dice. Essentially, the numbers which are shown on the two dice will determine just how far you or your opponent will be able to move on the Backgammon board. Each checker is moved separately and can be moved to any of the points that are not blocked. A point is blocked when an opponent has two or more checkers on it. Provided that a point has your checkers on it or no checker or just one checker, the point will be open. It’s important to note that checkers are always moved clockwise for one player and counterclockwise for the other player.

Once you or your opponent manage to get all your checkers to your respective home board, you’ll then be able to begin removing the checkers off the board. The first player who manages to do so will emerge as the winner. For a more detailed guide on how to play Backgammon, have a look at our Backgammon rules page where our resident Backgammon expert delves into all the nitty-gritty rules involved in playing the game.

No matter if you’re a Backgammon novice or you just happen to be a veteran, it’s always safe to practice playing Backgammon prior to engaging in a real money game; it’s always a safer bet to do so. Luckily, when it comes to this game, it’s very easy to practice. You can either practice while at home or you can practice online provided that you have nobody to play for. At GamblingPlanet, we have our very own Free Backgammon game to play in our free casino games section. You can enjoy playing the game online without having to download any pesky software or spend a single cent on the game itself.

As many history experts have said before, Backgammon’s history is immensely long, complex, but really interesting nonetheless. All in all, its history spans about 5000 years which makes it one of the oldest board games in the world. Backgammon’s roots are believed to stem from the country of Iraq or as it was named then Mesopotamia. Originally, the captivating game was not called ‘Backgammon’ and its board was made from wood and its dice from stone or bones.

Throughout the years, the game had several different names. In Roman times, in fact, it was dubbed ‘Duodecum Scripta et Tabulae’, or ‘Tables’ for short. Historians have recorded that Emperor Claudius held a special place in his heart for a good old game of Backgammon. He even had a special board built on the back of his chariot to help relieve him from the boredom of long and tedious journeys. Emperor Nero, who was a renowned gambler, loved the game and would often play Backgammon for real money. He was known for playing even up today’s equivalent of $10,000 a game.

For many years, Backgammon had different rules for people in different social circles and some people from lower classes were even banned for playing the game for a time. One such example that has been recorded was during the crusades when soldiers from a lower rank were prohibited from playing the game.

The name ‘Backgammon’ was first seen in print in 1645. And while nobody is certain how it got its name, there’s much reason to believe that it got its name from the Middle English words ‘baec’(back) and ‘gamen’ (game).

Over the years, the game has been mentioned in countless pieces of literature and even depicted in different paintings by various artists. In paintings, it can most famously be seen in ‘The Triumph of Death’ by Pieter Brueghel and ‘The Garden of Earthly Delights’ by Hieronymus Bosh. In literature, on the other hand, Shakespeare made reference to it in ‘Love’s Labour’s Lost’ by referring to it as ‘tables’ its old Roman name.

Today, the board game is still played in countless homes around the world as well as clubs too. You can also find various websites where you can challenge opponents to a game for free too. So you needn’t even leave your home to play a game should you wish to. And as we’ve pointed out earlier in our article, it’s also offered by a few casino sites too where you can play for real money. All you need to do is find the right one to play at and you’re golden.

Can Backgammon online for real money be played?

Yes, it’s entirely possible to play Backgammon online for real money. Yet, if you plan on doing so, you should always be aware of how it can go wrong and take steps in advance to find the best gambling site to play at.

Which are the best Backgammon sites to play at?

You’ll be able to find the best Backgammon sites to play at by browsing through the online casino reviews in the list that can be found at the top of the page.

Can I play Backgammon for real money on mobile?

Although Backgammon isn’t commonly offered by many online gambling sites, you will be able to play it for real money on mobile at some casinos should you wish too.

Is playing online Backgammon for real money safe to play?

Many of us grew up playing Backgammon with our family members for the most part of our lives. Yet, would have never thought it would be possible to play the game for real money at digitalized casinos growing up. Essentially, it’s a great way to enjoy a quick game of Backgammon provided that you have nobody to play with. And the best part about it is that you can lounge about in your PJs and play for real money whenever you feel like. There’s literally no waiting around in the hopes that somebody will feel like playing a game.

Backgammon Strategy - How to Win at Backgammon