Playtech is one of the world’s largest gaming software providers. It has been around since 1999 and creates the games that is served on online casinos around the world. Read on to learn more about Playtech casinos.

Just to give you an idea of exactly how global Playtech is, they currently employ over 5000 employees, they have offices in seventeen countries, 140 global licences, and 20 regulated jurisdictions. Phew! Pretty impressive for a software company. This powerhouse was founded in Tartu, Estonia by a group of entrepreneurs and in 2001 Playtech had its very first casino licence. In 2004 they founded the iPoker poker network which is now the largest poker network in the entire world. In 2006 Playtech started to trade on the London Stock Exchange. In 2008 the long-standing partnership between Playtech and the online casino giant William Hill was put into place when their signed an online gaming software licence agreement with them.

2011 was arguably one of the most important years in the history of Playtech. They managed to settle multiple acquisitions including Gaming Solutions, PT Turnkey Services Limited, PTTS, the mobile platform developer Mobenga and the games development studio Ash gaming. In 2012 they were listed on the main market of the London stock exchange, fermenting themselves as leaders in the field. In 2017 Playtech announced their biggest and best multi-year exclusive branded games deal with the famous Warner Bros. This saw Playtech developing a large range of games in relation to popular Warner Bros products.

Playtech is ahead of the game when it comes to developing software that caters to multiple platforms. In 2014 Playtech launched their very first multi-channel product called Coral Connect. This product was a real game-changer in cross-channel online gaming, and eventually let to the development of Playtech One.
Their cross-platform is run on their unified management system called the IMS. This allows online casinos to provide their games across all platforms such as desktop, laptop, all mobile devices as well as tablets. The quality, sound, graphics and overall experience is top-notch no matter what platform you choose to play on. Not only that, but your sign in is the same regardless of where you are playing so you can access the same online casino account on any device you own. 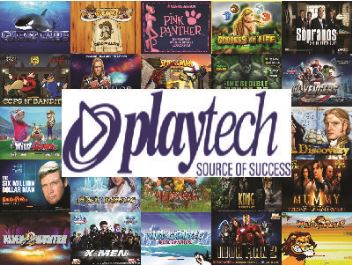 Playtech games are well-known throughout the industry, and they have the most extensive range imaginable. They have developed over 600 games both home grown and also their branded games. Some of the most popular branded games include The Dark Knight, Superman, Justive League, Gladiator, and Robocop, amongst others. Playtech has eight studios developing a range of games so the players will always have a large range of games to choose from. Some of their games include:
Age of the Gods, Goddess of Wisdom, BuffaloBlitz, Ace Ventura, Top Gun, Beach Life, American Dad, Green Lantern, and the Gladiator.

If the slots game weren’t enough excitement for you, then the Live Casino offers might. Playtech offers the worlds biggest live gaming offering so you have multiple games to choose from. They have all the latest technology ensuring that the quality is always high and you have an excellent gaming experience. Playtech live games offer varieties of Blackjack, Baccarat, Roulette, Unlimited Blackjack, Prestige Roulette, Baccarat, and Caino Hold’Em. The highest of quality is ensured as they use premium HD quality. If you are not a native English speaker then you are also covered, as they also have live dealers who speak Italian, Spanish, and Romanian, with more language offerings in the pipeline for the future.

Securing the safety and security of players is of top importance at this company. They truly understand their customers’ needs and their developers work hard to provide players with the highest security software. They always have the licences required, and put privacy and data protection at the forefront of all they do.
In order to safeguard against corruption and money laundering Playtech not only abides by all the international and local laws where they operate, but they have monitoring processes in place to ensure all the controls are in place and are being followed. They also work closely with the Gambling Anti-Money Laundering Group (GAMLG) to stop money laundering.

Playtech goes a step further than most to ensure that at risk players are stopped in their tracks. They acquired BetBuddy in 2017 which is an analytics program to identify gambling trends in users, enabling them to identify players who are at-risk and take action to assist them.

What games are available at PlayTech Casinos?

You can play an array of games at PlayTech casinos, including slots games, table games, and live games. They also have many popular branded games available such as Superman and Gladiator.

Which PlayTech casino games are the most popular?

Since Playtech signed a deal with Warner Bros, they have developed many online slots games which are based on well-known movies ranging from Gladiator, Ace Ventura to DC comics slots like Justice League and Superman.

As a global leader in online gaming software, PlayTech takes cares of its customers by securing data, following laws, acquiring the right licences, and using state of the art security software.

Are there multiple languages available?

Play at a Playtech Casino Today

Whether you are a slots lover, table game lover, poker, or live casino game enthusiast, Playtech has you covered. Play on any device you want without sacrificing quality, and you have a range of games and themes at your fingertips. Take your pick from the online casinos shown in the toplist for the very best of PlayTech casinos.