Video Poker effectively blends the concept of a Slots machines together with the classic card game, Poker. This captivating variant of casino poker combines both skill and luck which makes it a favorite amongst casino fans around the globe. Below our guide delves into everything you need to know about online Video Poker and we even pinpoint the best casinos to play it at too. 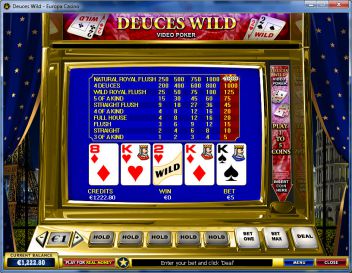 Since the advent of the first microchips in the 1970s, Video Poker games have become a staple at the lion’s share of casinos around the globe. At land-based casinos, the game bears a strong resemblance to a Slots machine. Yet, while Slots machines feature a plethora of different colorful symbols, Video Poker games don’t. In fact, they feature cards instead and the game is played more similarly to Poker than Slots.

As a game, Video Poker is based on the classic 5-card poker variant. Hands are ranked in more or less the same way that they’re ranked in Poker. So essentially, anyone with some basic knowledge of poker hands can play Video Poker.

Just like online Slots, you’ll be able to find online Video Poker games, that are at the ready to be played at your whim, at every online gambling site on the web. And while Jacks or Better is by far the most popular variant of the game by no shadow of a doubt, there are several other variants too.

On selecting a particular variant to play, it’s of utmost importance for you to be aware of the different types of games and rules available. Some of the most common types of online video poker games are:

Jacks or Better: This game uses the standard deck. The lowest winning hand is a pair of jacks.

Joker’s Wild: This game uses the standard deck plus a joker, which can be used in place of any card. The lowest winning hand is a pair of kings.

Deuces Wild: This game uses the standard deck. Twos (deuces) can be used in place of any card. The lowest winning hand is three of a kind.

Aces and Faces: This game bears much similarity to the immensely popular variant, Jacks or Better. Its added twist is its increased payouts for a Four-of-a-Kind hand with Aces and Face cards such as Jacks, Queens and Kings.

Double Bonus Video Poker: This game uses the standard deck. Games such as “Bonus Poker”, “Double Bonus” and “Double Double Bonus” give higher payouts for four of a kind. The lowest winning hand is a pair of jacks.

How to Play Video Poker Online

The objective of online Video Poker is to get the best possible five-card poker hand. The hand ranking follows standard five-card draw – a pair, two pair, three of a kind and so on. Games of Video Poker online start with selecting a bet amount. You can bet from one to five “credits” per hand. The more credits you bet, the more you can win on that hand.

When you have your first five cards it’s time to decide which cards to keep and which ones to throw into the virtual muck. Press “hold” on the cards you’d like to keep and then press “draw”. Now you have your final hand and can compare it to the payout table. Video Poker games often have different payout amounts for different hands. Depending on the online video poker game, the lowest winning hand could be a pair of jacks or three of a kind. The best possible hand is a Royal Flush (ace, king, queen, jack and ten, all of the same suit). Typically, if you’re playing Video Poker at a great site, you’ll be paid out a handsome sum of money for a Royal Flush. You can learn all about how to play Video Poker on our rules page should you need more information about the game. 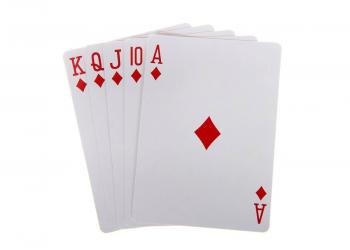 The other strategic concept that the lion’s share of online Video Poker players use is to check the payout tables, specifically the payout amounts for straights and flushes.

The big strategic question, however, is what cards you should keep and which ones to discard. In our Video Poker strategy section, we go through what to hold to maximize the profit. The best hand in almost all video poker games is the Royal Flush.

Online Video Poker games pay huge jackpots on Royal Flush hands, so experienced players know that they should draw to this hand whenever possible. Players will often discard winning hands to draw to a Royal Flush because of the tremendous payouts.

As with most casino games, another helpful tip to remember when playing this electronic card game is to stick to your bankroll. Beginners should play for the smallest amount possible. Even the best online Video Poker site will offer free games to new players to bring them up to speed on the game and the software interface. If you’d like to learn more about Video Poker strategy, we highly urge you to read through our guide which delves into strategy as well as odds.

Once you’ve learnt how to play the electronic card game, you’ll most likely want to play the game for real money. Yet, before you do, it’s always advisable to practice playing the game beforehand especially if you’d like to learn how to play strategically. At Gambling Planet, we provide a free Video Poker game that can be found in our free casino games section that you can use to learn how to play the game before heading to an online casino and depositing your cash to play for real money. It’s completely download free and requires absolutely no cash to play.

Unlike, games like Blackjack and Roulette, Video Poker has a rather short history. The first Video Poker by Dale Electronics was introduced at casinos in 1970s. It was called Poker Matic. In Sin City, literally every land-based casino had them installed. And as time passed the game, which set the foundation blocks for what was to come, started growing slowly in popularity.

During the mid-1970s, a distributor for Bally’s Gaming called Si Redd then started introducing a casino game known as Video Poker. However, the executives at Bally’s Gaming weren’t so keen on the idea and eventually allowed Mr. Redd to patent the game. Although Mr. Redd’s idea of the Video Poker machine was initially met with much apathy, Fortune Coin Company eventually backed the idea up. And ultimately, the first video poker machine which was known as the Sid’s Redd’s Coin Machines were born. The machines, which were also known by their acronym, SIRCOMA were mass produced but immensely slow to catch on.

During the 1980s the SIRCOMA machines finally started to garner a fan base of its own. In fact, they become the second most popular games after Slots machines. After a while, Redd renamed the company International Gaming Technology (IGT). Today, the company still exists and is still highly recognized in the casino industry.

As time passed by, the original Video Poker machines were scaled down in size and a house edge was introduced. Eventually, more Video Poker variants were also created too. Today, Video Poker has continued to thrive and has even been adapted into an online casino game. Casino fans continue to be seen crowding around the machines at brick-and-mortar casinos.

Yes, online Video Poker games are safe to play at online gambling sites. Provided that you’d like to play a game for real money but feel a bit wary of playing online, we highly recommend reading through our safe online casinos page which will take you through all the safety procedures that are usually employed.

Is there a Video Poker app I can download on my phone?

In today’s world most online casinos have adapted their sites for mobile users. While you’ll usually be able to access a site via browser, you can also opt to download the app too from Google’s Play Store or the Apple’s Apps Store.

Is there a good Video Poker trainer to use?

Yes, you’ll be able to find several Video Poker trainers online should you wish to practice playing the game before playing for real money.

Which are the best Video Poker Machines to play?

Although there are several Video Poker games out there which are all excellent, our experts really think that Jacks or Better, Joker’s Wild and Aces and Faces are some of the best ones out there.

Where can I play online video poker real money USA?

Video Poker is a staple casino game at online casinos USA. Generally speaking, you’ll typically be able to find more than one variant of the game being offered. You can find the best site to play at by browsing our list of US casinos.

Are there any other strategic games besides real money Video Poker?

Other than Video Poker, you’ll also be able to find other strategic games to play including online Backgammon, online Blackjack and online Poker. Provided that you’ve never played the games before, we urge you to read all about how to play them as well as the strategy involved.

Ever since the casino games was introduced at casinos in Las Vegas, the game has managed to reel in tons of players into playing it over the years. The electronic-card game provides players with a thrilling online Poker experience without having to endure a game for hours upon hours. The great news for all you avid gamblers out there is that now you don’t even need to waste time travelling to a land-based casino. You can simply just head to your nearest computer or pick up your phone and play your favorite Video Poker variant at the click of a button. For the very best Video Poker casinos across the vast plains of the internet, we suggest heading to one of our recommended casinos above.