The original intention of the Double-Zero wheel’s inventors was that no “inside bets” (or bets placed on the inside portion of a layout) would result in an uninterrupted series of wagered numbers on the wheelhead. Because of this, the numbers on an American Roulette wheel do not follow each other in numerical order. Yet the designers were by no means mathematical geniuses, and as a result, you can cover two whole quadrants on the wheel by making only three “double-street” bets (See: American Roulette Betting Options Chart below).

The following pictures depict scaled representations of an American Roulette table and the wheelhead itself. Take a moment to look them over and see if you can pick out the three double-street bets mentioned above: 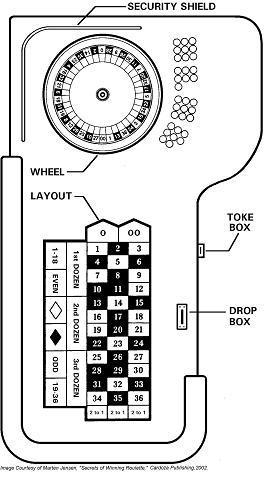 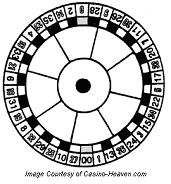 As you can see, there are three inside bets on an American Roulette layout that, if placed at the same time, cover two uninterrupted segments of eight numbers on the wheelhead. These three bets are the special double-street on the 0, 00, 1, 2 and 3; the double-street covering 7, 8, 9, 10, 11 and 12; and the double-street covering 25, 26, 27, 28, 29, 30. This type of betting is called contiguous betting. Suffice it to say, however, American wheels do have their week points, and for some systems players, that 5.26 house advantage can work in their favor.

As for the bets on an American Roulette layout, there are essentially 10 types with several propositions for each. In general, all American Roulette bets have a 5.26 per cent house vig, except the special double-street or “Basket,” which gives the house a whopping 7.9-percent edge. For this reason, it is generally called the “Sucker Bet.” (But as we’ll see, it can have its uses).

Other things to note about American Roulette include the use of “checks” and “buy-in minimums.” For its part, a check is a non-value token used only at a Roulette table in place of regular casino chips, with each player receiving a different colored stack to help delineate his bets from the other players’. Often, there is a minimum amount of money you can spend on checks at one time (i.e., the “buy-in minimum”), but you can assign your checks whatever individual worth you want as long as you bet the “table minimum” (or the least amount of money you are allowed to bet on one proposition). You could very feasibly, for instance, buy-in for checks worth a penny each. The only determining factor is whether the table has enough checks of one color to accept that denomination.

If you do decide to buy in for checks at a lower or higher denomination than the basic table minimum, the dealer will take one unused check of you color and a “lammer” (a small metal or plastic disk with a value printed on one side) and stack them on a rack on or near the wheel. This lets him know how much your checks are worth when you cash out, which you must always do because checks have no monetary value away from the table that issued them.

Some American Roulette tables will also allow you to bet regular casino chips or cash as long as no other player is betting with the same bill or chip denomination. Essentially, this is only a matter of crowd control because American casinos don’t want a fight erupting over whose money’s whose. If there are no more check colors to go around, you must always ask the dealer if you can bet this way so he can make sure no one else is using $5 bills or $25 casino chips. However, we highly advise you don’t do this so since many systems require a ratio of bets on multiple propositions and high-value denominations tend to make maintaining these ratios difficult.

Finally, some American Roulette tables in Atlantic City (and only in Atlantic City) have what’s called “Surrender.” This rule dictates that whenever a player loses an “even-money outside bet” (i.e., those that pay 1-1) because the ball landed on zero or double zero, he only loses half his bet. This reduces the house advantage on even-money bets to 2.63 per cent, and gives many systems a decided edge over the house. However, before you go praising the casinos bosses for their magnanimity, keep in mind that most boardwalk casinos have higher minimums than anywhere else in the U.S., making some betting systems nearly impossible.

How "Surrender" is used in American Roulette

In popular use at legendary places like Atlantic City, "Surrender" can only be used in American Roulette. The interesting thing about "Surrender" is it works in exactly the same terms as ”Le Partage”. The difference between the two is that "Surrender" only comes into effect once the winning number is either the single zero or the double zero. If you use the ”Surrender” rule, the house edge is reduced from 5.26% to 2.63% for all even money outside bets.

Here, we'll explain the numbers and likelihood of landing on a given number, or a cluster of numbers. Unlike many other casino games out there, it is very simple to calculate the probabilities in Roulette. It's important to understand the odds you face when making any decision when gambling so study this table and commit it to memory if you want to become a smarter and more accomplished Roulette player.

As we said before, the American wheel has 36 regular numbers, a zero, and a double-zero. Hence, you have 38 possible spaces on which the ball may land. So when you are betting on a single number, you have a 1/38 chance of winning. Over time, you will win 1 out of every 38 spins. Have a look at the probabilities for every possible outcome illustrated in the table below.

As you can see the payout for a single number is only 35 to 1. As stated before, you will need to spin the wheel 38 times to be ensured a win. This is where the house gets its edge. 2/38 spins will go to the casino, which converts to a 5.26% house edge. Of course, this table of odds is only relevant to the American Roulette wheel. The European table does not have the double-zero, so it is much more advantageous to the player. When given the choice, you should always opt for European Roulette.

Are you patriotic enough to give that American Roulette Wheel a spin?

When it comes to American Roulette, it's not just our Roulette Strategy page that will warn you against taking this particular thorny path. Of course, if after everything you've read, you're still hellbent on getting your American fix, visit our Online Casinos USA  page, grab yourself a cold one and knock yourself out with some of the best Roulette Games that are available on the net. After all, what's the fun in the casino game without a little risk?