As with many online casino games out there, strategy should begin before you start playing. And Video Poker is indeed no exception to this rule. It's important to remember, however, that while a lot of decision-making is involved in Video Poker, you're still ultimately playing against the house. Yet, by using a few Video Poker strategy tips, you’ll be able to give yourself a better shot at winning the game.

Using Optimal Video Poker Strategy to Win at the Game

Online Video Poker is favored over many other games including online Slots, due to the fact that strategy can be employed while playing the game. It also has fantastic payouts and return which definitely make it worth playing. Below we go through some strategy tips that can help you win at Video Poker.

How to Win at Video Poker

Know the Varieties Before Employing a Strategy for Video Poker 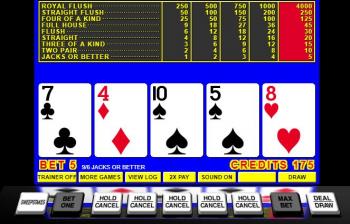 Before we delve into Video Poker Strategy, it’s important to remember that there are loads of Video Poker variations online and you should really make sure that you're familiar with the particular rules and payout schedule of the actual game that you are playing. This is important and cannot be overstated – different styles and variations necessitate different approaches as different payout schemes and probabilities are featured.

Being aware of these differences and taking advantage of the relative strengths and weaknesses is perhaps the most important part of any Video Poker strategy. Once you've become familiar with the different games and their variations, you'll need to pick your machine. Although many players fail to take this step, you should determine which machine has the best payout schedule and then, obviously, use that particular one.

Returns from Video Poker are usually much better than in online Slots and you have more of an ability to manipulate the house edge. You'd think it’s obvious, but too often players are in such a rush to sit down that they end up choosing a machine with a payout schedule inferior to that which can easily be found elsewhere – sometimes just around the corner or a few clicks away.

How to Win at Video Poker by Choosing the Right Machine

Again, related to knowing which game it is that you are playing, we'd suggest sticking to one form at a time. Jacks or Better is perhaps the most well-known and, with a global popularity, good returns, and its similarity to regular 5-card Draw Poker, the game is perfect for any beginners out there.

You'll also need to consider how much you intend to wager. Because payouts are tied to both your hand AND your bet. So you're going to want to think this through thoroughly. If you're going after that giant jackpot, you'll need to put up higher wagers, even though your chances of winning the 'big one' may be slim. Then again, you'd also hate to miss out on a truly gigantic jackpot because your wager was just short of the required minimum.

The decision is mostly a personal one and depends on your bankroll and objective(s). The only advice we can give is that if you're not going for that big jackpot, stay at least a couple of units away from the minimum. That way, you really are saving money instead of just missing out on that big jackpot should it hit!

Once you've selected your game and a machine, your strategy now focuses on your choice of which cards to discard. If you're just starting out, picking up a strategy card might be a good idea because it will help to instruct you clear as to which card(s) to discard for any typical hand. All you really need to be able to do though is decide/know which combination of 2 or more cards constitutes your highest-ranking combination, and then discard the cards that don't correspond to that combination.

Once you're able to do that, you're off to a good start. While no other brilliant strategy or system serves as a silver bullet, going with the plan of holding onto that best combo while discarding all others is about as sound a strategy as you're going to come across. Combine that with an accurate game and payout selection(s), and you're on as good of a track as anyone to success.

Below we've included simplified strategy guides for Jacks-or-Better and Deuces Wild Draw Poker – two of the most popular and prevalent Video Poker varieties often found online. We have also included a quick breakdown of tips/strategy for Jokers Wild, another popular Video Poker game. Check back often as we will be continuously adding new games along with respective strategy guides. If there is a variety or game in particular that you would like us to profile, do not hesitate to let us know. For some of you, these tips may seem rather obvious. But, if you're a beginner, read on and take try to memorize the charts when playing any of these games as, generally speaking, they represent some of the best ways to improve your chances of success.

When playing this variety, remember that only K and A are high cards here: this is a Kings-or-Better game. Some general tips to keep in mind with Jokers Wild:

Video Poker odds and probabilities depend a lot on which game/variation you're playing and the strategy you're employing. Therefore, it's difficult to provide a clear-cut odds sheet or listing of probabilities that apply to all forms of Video Poker. However, what we can do, and what we've done here, is provide the odds for being DEALT any of the following hands. Since Video Poker traditionally follows the same odds as 5-card draw, these odds may look familiar to you.

As you can see, the table, above, gives at least a bit of an idea as to what type of odds you're stacked up against in terms of accumulating certain hands. To sum up the table differently, you're basically looking at:

With an idea of the type of odds you're up against from the get-go, you should have a better ability to crunch even more numbers in your head as you move along. This table here is just a start.

Can I use the same Video poker strategy chart for multiple variants?

Different Video Poker variants have different rules that you must follow. So if you’re playing a specific Video Poker game, you’ll definitely need to follow a strategy chart which pertains to the game you’re playing.

Is there a Video poker strategy trainer I can use to practice playing?

Yes, at Gambling Planet we’ve got a free Video Poker game which you can use to practice playing the game and learn how to employ Video Poker Strategy. The game can be found in the free casino games section.

In truth, we all gamble to win money. And of course, the best thing to do is to employ a strategy when you can. By following our Video Poker strategy tips above you can truly better your odds of winning at the game and possibly even walk out of your online casino’s virtual doors with more cash than you originally hoped for.