So, you've found a few cool casinos and found a few different games that you enjoy. Now, you're looking for different ways or strategies to increase your success rates and probably learning about many different ideas and suggestions. Well, before you dive into any particular system that a group or individual advocates, you should be aware of some of the dangers and fallacies regarding betting systems in general. Below, we've briefly touched upon a few.

Would you be able to apply Betting Systems to all casino games?

The good news is that if you want to play to win real money and would like to have a system, you will almost certainly be able to find a system to apply to your game of choice. In reality, many betting systems out there were originally designed to be used in Roulette. That said, many betting systems can also be used for Blackjack, Craps, Baccarat and Video Poker. It really is just a question of matching the right betting system to the right game.

There are three different categories of betting systems: 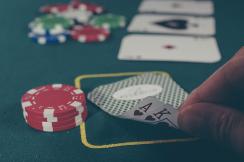 Below, is a brief list and description of some examples of the more popular betting systems. Before you attempt to employ any of these techniques, it's important to realize that there is no sure-fire solution and all betting systems are generally flawed when exposed to real mathematical probabilities. Remember, they call it gambling for a reason - do NOT rely on one particular system as a fool-proof guarantee of success.

Often labelled as a proof-tested system due to its old origins, the Martingale system takes for granted the fact that you will lose an infinite amount of times in a session, and applies largely to 'even money' bets. The principles of the system are as follows: if you win, you should alter your bet, but if you lose, you should aim at doubling the bet you just lost. The Martingale system is therefore a negative progression system. As described above, it is consequently a highly risky technique that relies on a considerable bankroll. The main idea behind the system is that despite the fact that you will lose on a regular basis, there is a moment when you will win, allowing you to recover all of your losses plus an extra. However, a number of casinos have house limits, which means that if you should reach that limit, the technique loses its credibility and legitimacy.

Similar in principle to the Martingale system but much safer, anyone using the D`Alembert system will raise his bet after each time he loses, and similarly will decrease his bet every time he wins. Using this technique will allow you to compensate your losses by gradually betting higher after losing, whilst letting you keep most of your winnings by betting slightly less each time you win.

Commonly used in horse racing, the Parlay system aims at taking the winnings from one bet, and investing those on the following bet. Being a positive progression system, this system can be regarded as being reasonably safe. Players using this technique generally aim for a winning situation that will occur in a quite distant future, as in theory it should protect the accumulated winnings.

The 1-3-2-6 system is a positive progression system that takes for granted that you should be able to win four times in a row. If bets are categorized on a scale of one to six units (six being the highest bet), your first bet should be 1 unit, the second 3 units, the third 2 units, and the fourth 6 units. Despite the mathematics involved in this system, it is fairly straightforward. All in all, the system offers insurance by altering the bets each time, and taking money away when you win at particular moments. If you end up winning four times in a succession, it is a very good opportunity to substantially increase your bankroll. However mathematics have the final word: it is equally as likely that you will lose four times in a row.

The Gambling Fallacy technique wrongly assumes that because a certain card or number has not shown up recently, it will definitely occur in a near future, hence the self-explanatory name of this particular betting system. The problem with this technique is that it incorrectly takes for granted that mathematical probabilities will give reason to whoever attempts to predict a 'future' situation. This is why relying on the Gambling Fallacy is highly risky, simply because the factual grounds of such a technique are largely inaccurate. Though it might be tempting on certain occasions to rely on the likelihood of an event to occur by basing one's judgment on past events, it would be advisable to avoid using this technique.

We've already covered the history of gambling, but many of our readers may wonder about the origins of specific gambling concepts like betting. War in itself could be considered the earliest and largest wager—entire kingdoms won or lost based on the smarter of two tactical calculations. Indeed, the oldest definition of gambling is not to wager money but to take a risk. The beginning of betting, then, also marks the beginning of modern money-based gambling. Betting in general dates back much farther than any of today's popular casino games. In the beginning, wherever there was a competition or sport, there was betting. In some cases, competitions were created for the sole purpose of giving royalty and other wealthy gamblers another opportunity to bet.

Unlike the crazy proposition bets we hear so much about today, the first bets were placed on classic tests of skill and speed like cockfighting, Grecian wrestling and early horse racing. The first horse races weren't the sprints we see at racetracks today but were instead endurance races held in the Middle Eastern deserts. European royalty took note of these competitions and started acquiring some of their own desert-bred racing Arabians. These Arabians were crossed on existing European stock to create the most popular modern horse racing breed—Thoroughbreds. The races were shortened to keep the interest of fickle European crowds, and by the early 17th Century the first track races were being held, and subsequently, the first track bets were being taken.

For centuries, most bets were simple matters—wagers made between friends and acquaintances. Texts from the Middle Ages have made mention of organized betting, but game historians have little to no concrete evidence of when bookmakers first came about. We know that the first gambling halls and casinos started to appear in Europe in the late 16th Century, and that taxed bets were offered at the tracks that were built in both Europe and America in the years that followed, but off-track betting wasn't legalized in Europe until 1961, making it hard to trace earlier betting shops.

Heathorn (now owned by Jennings Bet) was perhaps most famous for claiming to be the first British bookie, but William Hill has a documented history of gambling industry involvement dating back more than 70 years. Likewise, the legalization of gambling in Nevada in 1931 set the stage for a large number of betting opportunities. The first Las Vegas sportsbook is rumored to be the Stardust Casino which opened in 1958. With organized betting came organized betting crimes. Races and games were fixed, and dozens of respected athletes (most notably the 1919 “Black Sox”) were fined and even lost titles when their involvement in betting schemes was revealed. These days, most professional sports have a ban on bets made by athletes.

For a long time, betting shop options were pretty traditional, but William Hill became notorious for taking strange bets on everything from alien invasions to celebrity divorces to personal time of death. When bookmakers started to appear online in the late 1990s, the resulting boom in sports betting inspired bookies to look for new betting opportunities. Today, betting incorporates anything and everything. While classic sports like football, baseball, basketball, horse racing, car racing and boxing remain the most popular betting venues, some sportsbooks will offer odds on virtually anything with a variable outcome.

Are positive progressive systems of betting better than negative ones?

What happens if you use a negative progressive betting system?

Although you might actually manage to fatten your bankroll, using this system won’t really allow you to win much money. Ultimately, there’s always a house edge and chances are that you’ll either end up losing all your money or using a huge chunk of your bankroll just to break even.

Is the Gambler's Fallacy really a myth?

Is there a system which works every time?

No, there is not and if there was, everyone would be using it. What betting systems do provide is a structured approach and a good way for you to handle your money, the rest is just luck.

Place your bets on the right casino game for you!

For as long as games have existed, betting systems designed to beat the house have existed too and the internet bears testament to that. Of course, it's not just important to learn betting systems inside out but you also need to take your time to learn the rules which govern each game and keep in mind your bankroll. Ultimately, it's important to remember that no matter how good your betting system is, the house is always going to have an edge. So visit our Online Casino Reviews page, choose a casino which will fit in with your needs best and prepare to win big thanks to our Online Casino Bonuses. Here at GamblingPlanet the sky is the limit!